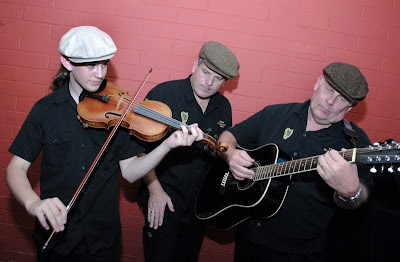 THOSE MANNING BOYS AND FRIENDS

Formed in 2002, Those Manning Boys, an Irish duo, has been dedicated to the furthering of the American-Irish culture. Since then Brothers Mike and Sean Manning, native Altadenans, have been playing at events and pubs all across the San Gabriel Valley and the surrounding areas. Mike’s 60s-rock inspired guitar and Sean’s ethnic -styled vocals have delighted and intrigued audiences of all ages.


In 2005, stepping in as a last-minute replacement, the Boys made their debut at the Concerts in the Park at Farnsworth in Altadena. Greeted by a rousing reception, they have been an annual installment since. Each year the show has grown in scope and depth by adding more musicians and instruments with an ever-increasing repertoire of Irish cultural music. Returning this year will be fiddler extraordinaire, Liam Lewis, playing his classically inspired jigs and reels. Last year’s hit on drums, Pierre Dupuy returns with his brother Andre, also brothers native to Altadena, and their band Wreck ‘n’ Sow. Another exciting young find , Altadena’s own Tim Drake will bring his mastery of the truly Irish instrument, the uillean pipes, Ireland’s form of the more famous Scottish bagpipes. And back for the fifth straight year the Aniar School of Irish Dance and their award winning troupe will present a very special half-time show to live session music. Newcomers, the Moynahans, Jesse , Eli and their father Tim will delight us with the penny whistle and other stringed instruments. Also joining the Boys this year is Barbara Schilling on the Celtic harp, the national symbol of Ireland. Cead mille failte-(a hundred thousand welcomes) to you.
Posted by R. Klomburg at 6:18 PM