Getting it down on tape

Reprinted with permission of the Pasadena Star News


ALTADENA - Area deputies may be packing more than guns when they make a traffic stop in coming weeks.

Through a $3,200 donation from the Sheriff's Support Group of Altadena, officials have purchased 60 electronic voice recorders to be used during traffic stops and other official interactions with the public.

"This affords (deputies) a tool in dealing with people on traffic stops," said Lt. Scott Young. "When complaints come in alleging they have been rude, they're encouraged to use the tape."

From time to time, people stopped for traffic violations make complaints against the deputies involved, accusing them of being harsh or curt with their language, he said.

When internal officials look into the complaint, it will be to a deputy's benefit to have the conversation recorded, Young said.

Carrying recorders is a trend among law enforcement agencies, but most officers purchase their own recorders, Young said.

The station has provided recorders in recent years, but many of them have stopped working or were kept by deputies who have left the department, Young said.

And they also serve other purposes.

"It's a great tool for gathering evidence and can be used in a series of ways," Capt. Roosevelt Blow said.

The recorders are useful for keeping track of any information or confessions made while a deputy is in-field, he said.

The Sheriff's Support Group was formed in the 1980s to keep the Altadena
Station open during a county budget crisis, and now frequently supplies the station with funding for various items.

"We've got them mountain bikes, computer monitors, scanners, a lot of electronic hardware and things that are just not available in the budget," said group president Robert Klomburg.

Along with the voice recorders, the group also purchased four new Tasers and 27 new holsters for the station.

Posted by R. Klomburg at 12:46 PM No comments: Links to this post

Click on image to make it larger.
If you plan to attend, enclose a note indicating you would like to be seated at the Altadena Tables. 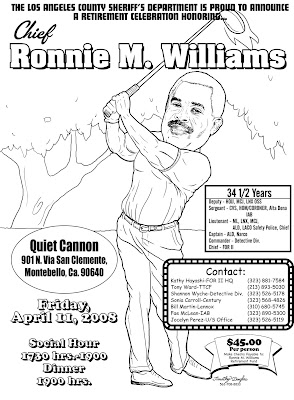 Posted by R. Klomburg at 1:19 PM No comments: Links to this post