Here is the menu from El Patron Mexican Food Restaurant who will be cooking and serving throughout the entire Summer Concert Series, and at very reasonable prices. They will vary their offerings at each concert. It is a thrill for us to have a local restaurant joing in the family fun of the SCS. 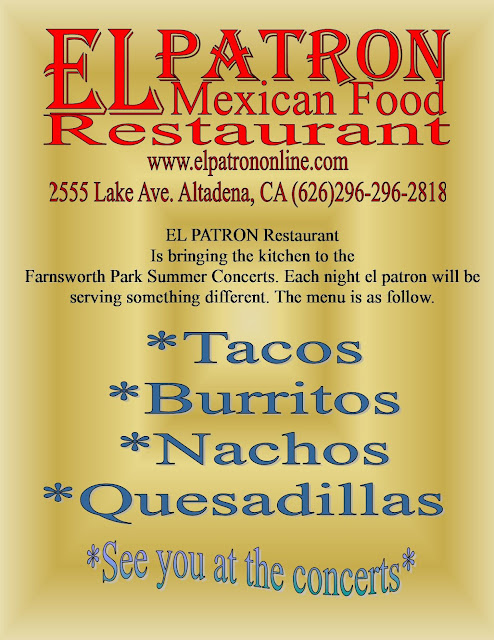 Have a safe and happy 4th of July!

Our Altadena Station is being very proactive in making it so much easier to connect to what is going on with Law Enforcement in Altadena.

They have just launched their own website which can be found here: www.altadena.lasd.org

Even better ALD 7 has a new Facebook page which can be found here:  http://www.facebook.com/AltadenaSheriffsStation

We always enjoy you comments. So, send them when the mood hits you!

Don't forget, we are just 15 days away from the 16th Annual Summer Concert Series at the Amphitheater in Farnsworth Park. We open the nine concerts on July 7th with Those Manning Bhoys. They promise another great variety act with songs from Ireland and Scotland. It's an evening to not be missed!

El Patron Mexican Food Restaurant will be serving some of their Classic dishes and the Rotary Club of Altadena will again be serving beer and wine.

What is better way to spend a Saturday night under the stars!

We look forward to seeing you on July 7th.

Please sign up for Nixle at www.nixle.com We would like all of Altadena to subscribe to keep up to date on what is happening in Altadena.

El Patron to cook at the Summer Concert Series 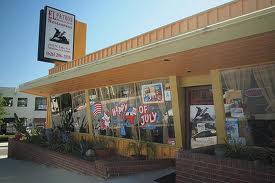 
The Sheriff's Support Group of Altadena is thrilled to announce that El Patron Mexican Food Restaurant will be cooking and serving throughout the entire Summer Concert Series. They will be located in the Mt. Lowe Pavilion where there are plenty of picnic tables or you can bring you meal back to your seat in the amphitheater.

The menu has not yet been finalized but you can bet it will include burritos and tacos and more.

We are not sure of the hours of operation, but we will pass that on to you once that is determined. We think it will between the hours of 6:00 PM and 8:30 PM.

Tacos and beer under the stars listening to great free music, it just doesn't get better than this!

Please place all your trash in the bins supplied by Athens Services. Please do not leave anything behind in the amphitheater. Thank you!

See you on July 7th in the 'Hollywood Bowl of the Foothills' where Supervisor Michael D. Antonovich will be present to introduce Those Manning Bhoys and the Irish Pride Dancers.
Posted by R. Klomburg at 3:36 PM No comments: