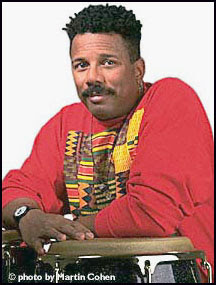 Seasoned percussionist Darryl Munyungo Jackson possesses an ever-increasing collection of instruments with which to execute his craft. That is one of the reasons this warm & unassuming West Coast artist can be found in virtually any musical setting—whether it’s Funk, Pop, Jazz, Latin, Reggae, or traditional dance music of such countries as Nigeria, Senegal, Ghana, Haiti, Brazil & Cuba.

Despite his youthful appearance, Munyungo is no newcomer: in his over thirty years of playing, he has developed an awesome versatility & became a well-respected & much requested session, concert & tour player. He has performed with Miles Davis, Stevie Wonder, Sting, Kenny Loggins, Herbie Hancock, Dianne Reeves, the Zawinul Syndicate, George Howard, Ronnie Laws, The Temptations, Four Tops, The Supremes, Bennie Maupin, Bill Summers, Marcus Miller, & dozens of others, including numerous ethnic music & dance troupes.

Munyungo’s passion for the timbales was only the beginning. From that point, he made the natural progression to Congas, Bongos, Latin Percussion & beyond, eventually to religious Bata Drumming & numerous drums & percussion from many different cultures.

Subsequently, he met & worked with traditional drummers from Africa, Latin America, the Caribbean, China & Japan resulting in a collection of over four hundred percussion instruments & drums from all over the world — all of which he plays proficiently.

Why that name? On several occasions, he performed with some players from Africa & the Caribbean, who would shout “Munyungo!” (Which is a Zulu word meaning “door” or “entrance”) to cheer him on as he played — and it wasn’t long before the word attached to him as a nickname.

Now, for him, the name means “Gateway to Heaven.”
Munyungo is deeply committed to understanding — & keeping alive — the tradition surrounding the instruments he plays. “It’s hard to study drums without studying the cultures from which they come,” he points out. This respectfulness seasons his playing with hearty passion & enjoyment.

For series information visit: www.altadenasheriffs.blogspot.com or call; 626-296-2103
Posted by R. Klomburg at 5:51 PM No comments: 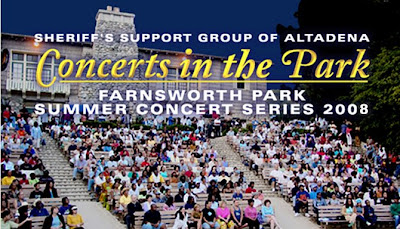 A BIOGRAPHICAL OVERVIEW
Benson Brown's musical career spans a period of 40 years. His vocal stylings encompass a variety of musical idioms such as ballads and show tunes tastefully laced with jazz, R & B and gospel.

His early professional career began with singing on the piano bar circuit at various supper clubs and dinner houses on the West Coast from San Diego to San Francisco.
During an engagement on the Sunset Strip in Hollywood he met Jimmy Rowles, a renowned jazz pianist and was invited to sing with him at Sherry's on the Strip, a popular jazz nightspot.
While enjoying a successful stint with Jimmy Rowles, he was heard by Louie Belson who invited him to appear with his big band at the Hollywood Palladium and various theatres in New York City.

His latest endeavor is based on the nostalgic premise of bringing back the beautiful music from the 40's, 50's and 60's by such vocal icons as Nat King Cole, Billy Eckstine and Johnny Hartman, while using his own vocal stylings and interpretations. Benson Brown is a new millennium balladeer with his roots· firmly embedded in the rich sounds of jazz from a kinder, cooler, gentler time.

Robert Pope started studying and playing the upright bass in New York City in the 1960s. He studied with Ron Carter and Cecil McBee. His first professional gig was in 1965 with the original Inkspots, led by Deek Watson.

He was also a member of the Jazz Mobile Band in New York City in the late '60s. He led several groups and freelanced until 1990, when he returned to his hometown, Pasadena, Calif.
He attended Pasadena Community College's Jazz Program and played in the Studio Jazz Band and the Pasadena Community Orchestra.

Prior to forming Sounds of Jazz Quintet, he freelanced in the Los Angles area. He played the W orId Stage several times with his band, and his group played three years in a row on the Jazz Caravan. He and his band also played at the Temecula Jazz Festival and at Club 322. Today, he freelances around the Los Angeles area and performs with singer Benson Brown.