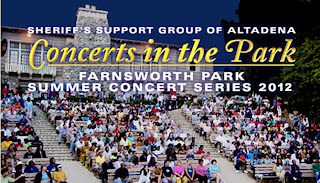 The 16th Annual Summer Concert Series is just around the corner. Well, just a little under 7 months from now.

We start the preparation for the SCS in January, and we are in ‘fundraising’ mode right now. Altadena is the only unincorporated Community in the San Gabriel Valley which produces a SCS without the benefit of being a City and having the resources that a City would have to mount a SCS. Nearly all our funding comes from the private sector, in the past we have had Warner Bros. Entertainment, the Rotary Club of Altadena, Podley Realtors, Toyota of Pasadena and Altadenablog to name a few. In addition we have received great support from Supervisor Michael D. Antonovich and Los Angeles County Department of Parks & Recreation for providing the beautiful and newly refurbished Amphitheater at Farnsworth Park.

Every year it has been a challenge to raise the money for the artists who preform and for our professional sound and light engineer. This year is no different. We need your help!

If you or your company would like to be a sponsor, please contact us at www.info@altadenasheriffs.org we will quickly get back to you with all the details of what your sponsorship does for you and or your company.

We had a great line up last year and we were thinking about having a few of our artist return this year. We would love to have your input. Just e-mail us at the above address. If you need a refresher about who performed, click on this link: http://altadenasheriffs.blogspot.com/2011/02/2011-summer-concerts-in-farnsworth-park.html
The Sheriff’s Support Group of Altadena is proud to have produced the Summer Concerts for the past 15 years and we look forward to the 16th Annual Summer Concert Series, an Altadena Tradition and a family friendly event!

Please let us hear from you and we are looking forward to seeing everyone on July 7th! 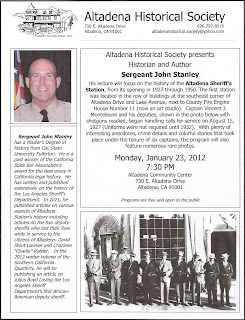