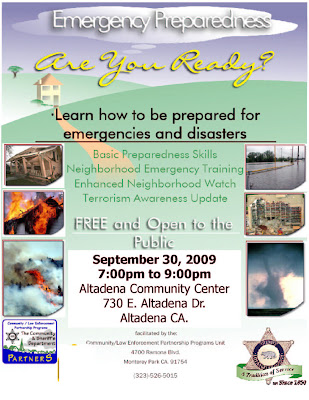 The 2009 Concert Series came to a close this past Saturday, 9/12, with a spectacular performance by Dean Colley in his Ultimate Tribute to Neil Diamond.

The Summer Concert Series is made possible by the generous support of our Sponsors, and we would like to thank them one more time.

Below, we have a short questionnaire, please take a few minutes and provide us with you opinion of the 2009 Summer Concert Series.

And, thank you to our concertgoers, that's why we do the Series, for your enjoyment and our commitment to the Community of Altadena.

Have a great winter and we hope to see you all back next year! 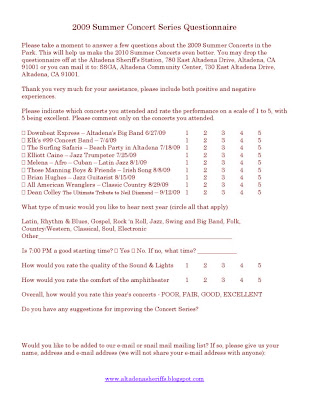 Click on image to make it larger and for printing

The details for the forum to address the spike in residential burglaries have been firmed up.This is your opportunity to find out what the Sheriff's Department has been doing about burglaries, what they are currently doing and what is planned. It is also your opportunity to find out what you can do to HELP the Sheriff's Department and your neighborhood, including ways to better protect your homes without jeopardizing your safety.

This forum will start promptly at 7 pm. The doors will open no later than 6:30 pm.

Please make plans to attend.
Posted by R. Klomburg at 10:51 PM No comments: 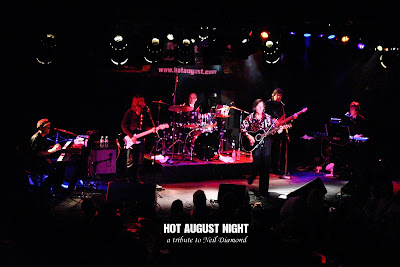 Lead singer Dean Colley has been performing in rock bands since 1982, after leaving the University of Southern California, where he was studying biology. 15 years of playing in bars and regional fairs followed playing rock and roll covers with other local musicians. All the while, people began taking notice of Dean’s ever more prominent resemblance to Neil Diamond. Soon, audience members were asking Dean if he did any Neil Diamond songs.

A short time later, a local businessman asked Dean if he’d like to put together a tribute to Neil Diamond. Dean accepted the challenge and began studying the songs of the legendary singer/songwriter. After a trial version of Dean as Neil Diamond in a small club, he was offered a chance to perform for a community concert put on by a local Kiwanis club. From there, the show became known as “Hot August Night”, after the title of Neil Diamond’s live album recorded at the Greek Theater.

Many versions of the band followed. Players came and went. However, a chance audition for a tribute show for military personnel in Japan introduced him to a whole new level of players. These musicians were seasoned professionals and put a whole new spin on Dean’s presentation. After arriving home after the tour of Japan, Dean convinced the band to play in Hot August Night. This led to working with better musicians and an outstanding presentation.

Information regarding evacuations in Altadena

Report from the Altadena Sheriff's Station:

We understand there is quite a bit information being disseminated in various outlets, but this is the most accurate to date: