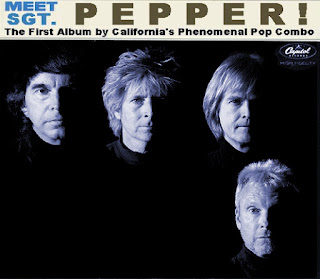 Rocking & captivating ... Sgt. Pepper performs music by the
Beatles and other British Invasion artists at festivals, concerts in the
park, corporate events, private school fundraisers, wedding
receptions, colleges & night clubs. Although Sgt. Pepper focuses on
Beatles and other British rock & roll, it can also perform many other
classic rock, soul & country tunes, as well as standards and bossa
nova music for cocktail hour. As a testament to the band's versatility,
it can perform songs by the Allman Brothers to ZZ Top & everything
in between! Sgt. Pepper's members are well-known L.A. based
musicians and singers who have performed with major recording
artists, leading music agencies and/or other bands. They came
together to form Sgt. Pepper out of a mutual love of Beatles' music.
Their timing couldn't have been better. Due to the release of Beatles
Rock Band and the re-mastered Beatles catalogue, national interest
in Beatles music has surged, proving once again that the Beatles are
the most popular recording artists of all time, with fans ranging from
teenagers to septuagenarians.